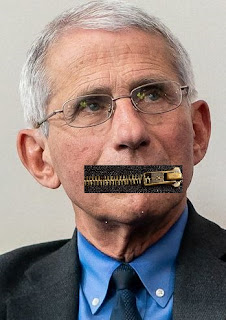 Doc Tony Looks To The Heavens For Advice And Console

Americans would be better off if the nebulous Doctor Anthony Fauci (aka "Doc Tony") would keep his mouth shut on these often-changing COVID utterances... can't argue that Doc Tony and the lethargic CDC are all too frequently moving the goalpost on the entire COVID advice matter.  Their collective actions seem very similar to that comedic football-holder Nancy as she always moves the football when Charlie Brown runs to attempt a kickoff.

An article viewed on TV a couple of nights ago stated that the incidence of influenza (aka "the Flu") is way, way down this 2020/21 season -- seems the Flu count is in the noise level this year.  The article's root-cause speculation is that most people are listening to sound medical advice.  People have worked to avoid socializing in large groups while simultaneously doing more logical activities to clean-up their personal life.  People are more frequently washing hands, avoiding touching our faces so much, doing cleaner things to wash and disinfect objects around the house and at work -- and yes, wearing these troubling face masks in public.  It should be obvious to the most casual observer that staying away from other humans and using higher standards of personal cleanliness has impacted ALL virus-born infectious diseases like "the Flu" -- and probably the incidence of the common cold. I've wondered why it takes scientists like Doc Tony to tell us these things -- over and over again.

It seems quite logical that the Flu count, among the incidence of all virus-born disease, is much lower over the past year.  I've suspected for many months that some significant percentage of the high alleged COVID death count cases is actually what the "scientific community" historically once called the Flu, acute bronchitis, or a bad common cold -- not surprising at all that reports of the Flu and other respiratory infection have essentially been significantly reduced these days.  Genealogists know that death certificates, where they exist in the late 1800s and early 1900s, frequently record the cause of death as "lung congestion."

But these scientists and medical professionals seem to resist telling people the truthful respiratory illness data in concise and easily understood communication -- the actual statistics on how effective America's collective cleanliness has been on the transmission of ALL respiratory infectious disease.  Perhaps the statistical truth is troubling to those scientists who make their living by telling us the sky is falling.  And then there is this untruth too: "A lie told often enough becomes the truth" -- V. Lenin, et al.

23andMe DNA updates effective December 24, 2020, on D. J. Paul's raw DNA.  The two charts cited as follows show the ethnicity estimates done by 23andMe before and after December 24, 2020.  Of course, DNA does not change, but improved methods and estimate techniques continue to evolve over time, and estimates change slightly as the ethnicity estimate models are better defined by improved modeling methods as applied to the same raw DNA data.

Comment: The new ethnicity estimate conforms better relative to what our ancestry paper research concludes.  I'm proud to report that I'm a member of the largest minority group living in the United States -- not one-third, half, or two-thirds European -- but a certifiable "100% European American" by a fully recognized DNA authority. 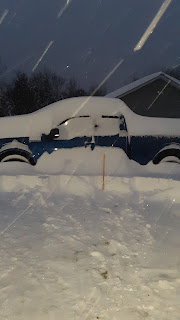 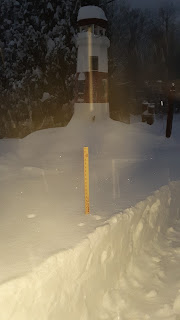 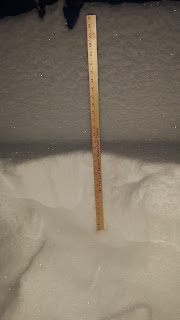 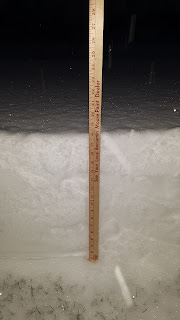 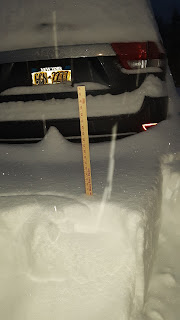 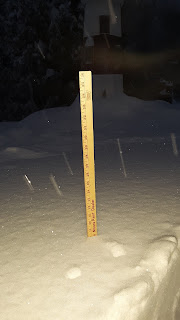 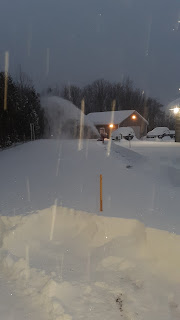 Center driveway westward, Terri with snowthrower near the garage. 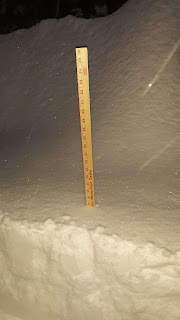 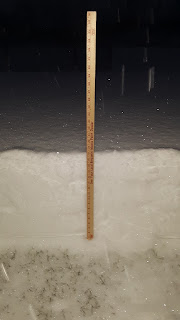 Western mid-driveway toward the garage 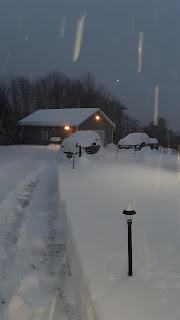 Driveway toward the west. 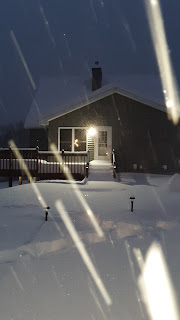 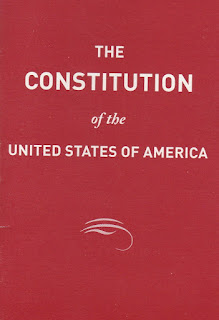 A friend of the court amicus brief dated 12/11/2020 by Citizens United, et.al. as filed with the Supreme Court of the United States is exactly on point.  The 19-page document is presented by the below-cited link.  Pages 1-6 amount to the paper front-matter, and as a time saver skip right to and begin reading with at page 7.  The amicus document is highly rational and a fairly easy read.  Every citizen of this republic needs to understand what procedurally went wrong outside the United States Constitution in our 2020 American presidential election.

Want to understand why the 2020 election was conducted under unconstitutional conditions by some states?

Click on Amicus Brief to read this 13-page classic argument.  The choice of U.S. Presidential Electors in Pennsylvania, Michigan, Georgia, and Wisconsin must be referred to these individual state legislatures.

As suspected, Chief John Roberts in a majority court opinion found the way to kick TX v PA, citing Texas has no authority (or lacks standing) to file the TX v PA SCOTUS original jurisdiction case.  In tossing the case, the SCOTUS makes no judgment on the merits of this case.  Justice Thomas and Justice Alito disagree in this fundamental opinion -- wherein citing, the U.S. Supreme Court must take any case that involves original jurisdiction. Our blind Chief Justice John Roberts wins again by sitting on his hands and does nothing.  Way Hey and up she rises -- Roberts -- a passive champion and inert lump of coal who unfortunately wears that inglorious black robe.  A guy who obviously looks to CNN for a mindless legal opinion.  Roberts and his minions win again.  VERY SAD: Hail To The Chief!

A Fine and Happy Day To All USA Military Veterans 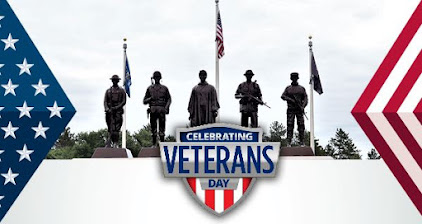 The United States Of America 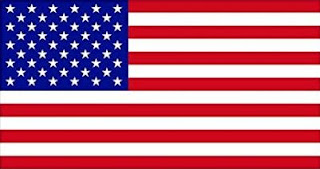 Many Thanks For Your Gallant Service! 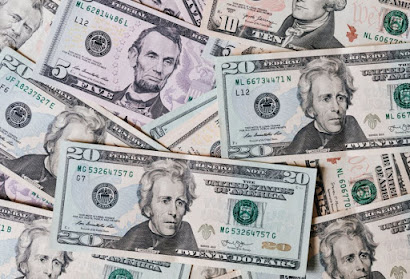 Please take a look at this National Legal and Policy Center news article cited in the associated link.  Donations of $70 million+ from the Chinese Communist Party entities to the University of Pennsylvania (UPENN) and to UPENN's recent invention named the "Biden Center for Diplomacy and Global Engagement." Communist Chinese dollars to fund the Biden Center... allegedly part of the "Anonymous" Money Laundering 101 scheme to pay-off Joe Biden? So ask yourself honestly – where did the near One Million Dollars to pay Joe Biden's UPENN salary come from? That old Brooklyn Bridge remains for sale for those who think that Biden's UPENN salary funding is not tied to the Chinese ruling party.

Click this link to read more about the complaint...
CLICK HERE
https://nlpc.org/2020/05/21/complaint-filed-against-university-of-pennsylvania-and-biden-center-for-undisclosed-china-mega-donations/
This Post Originally Published On August 31, 2020
Back in 2016, several thousand dollars were sent from accounts at Fidelity Investments to other financial organizations after discovering Fidelity paid Mrs. Clinton over a quarter million $$ for a  2015/2016 Florida public appearance and 90-minute speech to the Fidelity unwashed upper managers.  My question, just what sage financial advice is it that Clinton could or might convey to top professional Fidelity Money Managers?  A complaining message on this was sent to Fidelity's CEO, and a form reply was received back from some middle-level PR functionary that stated this business practice was none of my business.  Well, Fidelity in large part lost one customer... but sadly seems Fidelity continues well without me and other disgusted investors... we the customers.  Welcome to a new college course in under-the-table corrupt business practices... call it Money-Laundering 101.  It is past time to see precisely how doner contributions are divided up among various public and private university accounts and just what percentage of the aggregate donations are paid out in these not-so-obvious (aka "under-the-table") political contributions.
And finding stuff conveyed in the link below on Joe Biden's grossly over-paid association with the University of Pennsylvania (UPENN) is equally disgusting.  Very surprised to read that "Slow Joe B" (and his buddy Jeb Bush, et al) are similarily big-buck associated with this and other universities like Drew U, Vanderbilt U, etc., etc... don't be surprised if the vast majority of institutions of higher learning do similar unchecked little disclosure on these big-buck political payouts.  So where do these schools of higher learning get those big-$$ spent to buy the "prestige" of politicians like Slow Joe B?  It may surprise some to find that among the distinguished graduate donors to UPENN, for example, is Warren Buffet (a super-rich guy and no friend to Republican/Conservative thought)?  And just how is it that any clear-thinking person can see these large donor contributions to universities as anything short of money-laundering to avoid the legal limits on personal political contributions.
OBTW, a big-belly laugh: Biden’s official title at UPENN is the Benjamin Franklin Presidential Practice Professor — he the first person to hold that invented job.  🙈
CLICK  Slow Joe Payoffs to view the article.

A Couple Stones No Longer Missing

Statements by some "Graver" contributors that FindAGrave.com (FAG) is not a genealogy website are flatly untrue. This incorrect opinion stated by some long-time gravers grossly understates the historical value of well-prepared FAG profiles. The truth about marginal FAG profiles created by some is – "GIGO" – Garbage-In-Garbage-Out.  This is true: FAG profiles created with untrue, unknown, or wishful thinking are not genealogically helpful. In the Internet Age, poorly written FAG profiles are now a direct cause of significant misinformation in current Ancestry.com family trees -- peppered with many errors in beginner genealogist's trees.  Time for long-time gravers to recognize and accept that for over a half-dozen years now, FindAGrave.com is a wholly-owned subsidiary of the leading genealogy service offered by Ancestry.com. Profiles created at FAG are increasingly more closely linked to all family trees at Ancestry.com via their well-designed database search and hint criteria.  It is time for all FAG contributors to accept that the graver mission at FindAGrave.com is changed – please consider your continued caring graver work under this new management reality.

A happy personal note was the July 2020 discovery of our 3rd Great Grandparents James and Julia Clegg, a couple unsuccessfully researched for about a decade or more, and finally found via a welcome Ancestry.com "Hint" leading to FindAGrave.com.  This welcome Ancestry hint was presented by what seems to be updated and better-defined hint criteria in Ancestry.com's growing genealogical database. The value of this improved FindAGrave.com-to-Ancestry.com database linkage seems to be paying strong dividends in current genealogical research – and this is very much appreciated.  Thank you.